Pelopac honoured by the «Food Bank of Thessaloniki»

Pelopac honoured by the «Food Bank of Thessaloniki»

Last Tuesday, March 23rd, during a very special event held at Thessaloniki City Hall in honour of the donors and supporters of the Food Bank of Thessaloniki, Pelopac was awarded an honorary plaque for its contribution.

Mr Konstantinos Pacheos, the Purchasing Manager of the company, received the award and assured the audience that Pelopac, together with the representatives of all leading manufacturers who support the non-profit organization, will do its very best to increase the volume donated at this time of need.

Since 2015, the Food Bank of Thessaloniki has been operating as an independent non-profit charitable association, dedicated solely to alleviating poverty and reducing food waste. At this point, it supports over 5,000 people per week, while also providing food to 25 meal programs and, on occasion, 10 other feeding programmes and institutions. 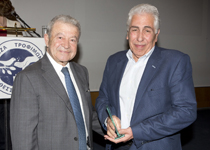