Pelopac is going ahead this year with a €3 million investment plan which will increase its production capacity by 50%. The company has managed to increase its turnover by more than 60% over the last five years, using its strong exports as its main weapon.

The Thessaloniki company exports almost all its production (as private-label products) and has an important presence in the demanding US market, which now makes up 60% of its total sales. Other markets in which it is active are those of Australia and the UK, which account for 15% of its turnover each, and then, with very small shares, are the markets of Central Europe, Scandinavia, South Africa, while in 2017 it made its first steps in South Korea. As mentioned by the company head Constantinos Constantinidis, the next major export goal is Canada and then Germany. The company believes both markets will provide great growth prospects.

Pelopac products include, among other things, olives in jars, plastic tubs and pouches, as well as spreads (olive paste, pepper paste with feta cheese, aubergine dip, etc.), while we should note that Pelopac has "broken into" the travel catering. It recently became active in this sector supplying a very successful product to Easyjet and other airlines. Over the last two years the company has achieved turnovers of more than €17 million (€17.3 million in 2017 and €17.8 million in 2016), recording an increase of more than 60% in relation to the €10.7 million for the 2012 fiscal year, retaining steady profits, which, for 2017, came to approximately €500,000.

This year Pelopac is starting a €3 million three-year investment plan, which will be completed in 2020. It consists of new buildings and the expansion of its production capacity with new production lines that will increase its output by approximately 50% and will be able to support a turnover of at least €25 million.

The company is based in the Sindos Industrial Area and now employs 160 people, compared to 90 people that it employed in 2014. 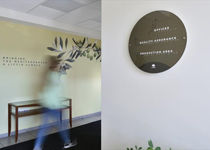